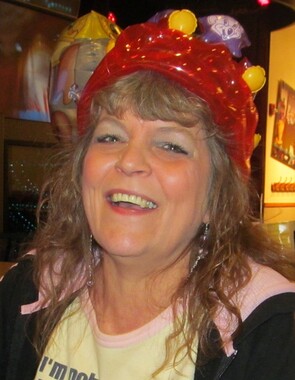 Back to Cheri's story

Cheri Lea Murphy, age 61 of Charlestown, was born to the late Roy and Viola Peters on January 24, 1958. She entered the gates of heaven and was greeted by her daughter, Cassandra Lea Murphy, on Thursday, January 16, 2020.
Cheri was born and raised in New Albany, IN and graduated from New Albany High School in May 1978. She raised two daughters, Cassandra and Michelle Renae. Cassandra was born with cerebral palsy and severe mental retardation. Cheri was the greatest mother and advocate for Cassandra up until her passing at the age of nine on December 17, 1986. Cheri gave every ounce of her love to Jesus, her grandchildren, her daughter and son-in-law and her pets Stripie (cat) and Mr. T (turtle).
She is survived by her daughter Michelle Renae, her son-in-law Dennis Gagnon, her grandchildren Gabrielle, Lucas, Natalie-Grace, Liem and Emarie, her sisters Joan McGuffy of New Albany and Sue Lawler (Tom) of Louisville and her beloved pets.
The visitation will be between 3-5 pm on Sunday, January 26, 2020 at Memphis Christian Church in Memphis, IN, with funeral services to immediately follow. Flowers and condolences may be sent to Memphis Christian Church on Saturday, January 25 between 3-4 pm. Grayson Funeral Home is handling the arrangements.
Published on January 21, 2020
To plant a tree in memory of Cheri Lea Murphy, please visit Tribute Store.

Plant a tree in memory
of Cheri

A place to share condolences and memories.
The guestbook expires on April 19, 2020.