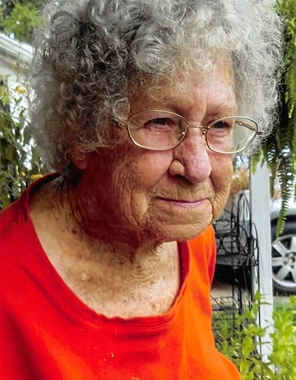 Back to Christine's story

Christine Pratt, 96 of Otisco, IN passed away on Tuesday November 26, 2019 at Sellersburg Health and Rehab.
Christine was born on September 4, 1923 in Liberty, KY to John and Claudia Clarkson Hall. She was a former cafeteria worker at Jeffersonville High School and a former bagger at I.C.I. in Charlestown, IN. She also had attended Silver Street Christian Church in New Albany, IN.
Christine is preceded in death by her husbands, Kenneth Lee Slaughter and Willard Pratt; sons, Donald and Larry Slaughter; granddaughter, Shawn Slaughter; great grandson, Kenneth J. Browning and several brothers and sisters.
She is survived by her sons, Robert L. Slaughter (Martha) of Otisco and James E. Slaughter (Nicki) of Sellersburg, IN; brothers, Mike Hall of Charlestown and Robert Hall of Jeffersonville; 12 grandchildren, 31 great grandchildren and 31 great great grandchildren.
Life Celebration services will be held at 11:00 a.m. on Monday December 2, 2019 at Grayson Funeral Home in Charlestown with burial in Walnut Ridge Cemetery. Visitation will be from 1:00 pm to 5:00 pm on Sunday and after 9:00 am on Monday.
Published on November 30, 2019
To plant a tree in memory of Christine Pratt, please visit Tribute Store.

Plant a tree in memory
of Christine

A place to share condolences and memories.
The guestbook expires on February 27, 2020.

Michelle Slaughter
I love you Granny! Always have and always will! I know you love Jimbo and Marci (James Edward Slaughter, Jr. and Marchelle Denise) more than anyone could know. I'm sorry they were left out again!
View all