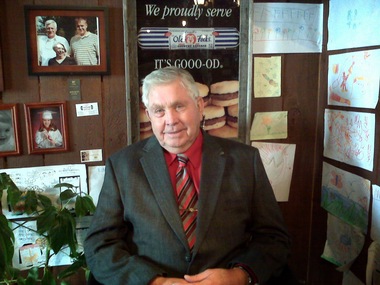 Back to Dewey's story

Dewey Woods, 90, slipped quietly from this earth to the arms of his Loving God on February 10th, 2020, at home surrounded by his family. While his earthly birthday would have been Sunday, we know that he is celebrating his new birth in a way that we can only imagine. We find comfort in the assurance that he will be waiting to greet us with open arms when it is our time to go.

He retired from General Electric in 1994 after almost 40 years of service. He was also a carpenter, and enjoyed building anything from small projects to houses and barns. He shared his talent with his grandsons and anyone else who was willing to do an honest day's work. We are still finding boxes and jars with nails of all sizes stored in the garage! He never let Deborah get over the fact that she pressured him to quit roofing when he was 80.

His love for work was only exceeded by his love for his God and his family. Our sweetest memories will always be of him on the floor in the middle of a pile of kids, laughing and playing like one of them. Or of him snuggling one of the babies to his chest, kissing and singing to them.

Dewey was a great storyteller. We could sit for hours listening to him tell stories about growing up on a farm with 10 very precocious brothers and sisters. He had a certain way of saying things that we called "Deweyisms". We will certainly miss them.

The course of his life was charted when he was ordained into the ministry at the age of 13. He spent many years and logged many miles preaching the Good News about his Lord and Savior. He worked as a circuit preacher for the Temperance Union and preached in every county of Kentucky. He also worked for the Southern Baptist Home Missions Board and founded the First Baptist Church of Fremont, Ohio. There have been eight churches established from that one seed that he planted.

He studied at Georgetown College, Campbellsville College, and the Southern Baptist Seminary. He loved talking about world religions, and could tell you the founders of all of them, the year that they were established, and their doctrines. He was also an avid reader. His library at home had over 700 books the last time that we counted them.

Dewey was a long-time member of the First Baptist Church in Jeffersonville, Indiana. As long as he was able, he participated in all of the activities there.

The family would like to thank all of his caregivers from Caretenders, Kindred Hospice, and the staff of the University of Louisville Hospital for all of their compassion and professionalism. They all exceeded our expectations in the manner in which they cared for him and us as a family.

Dewey is preceded in death by his parents, Purvis and Virginia(nee Simpson) Woods, brothers Cecil, Guy, Elmer, Bernard, Alan, Arley Jackson, and Joe Woods, sisters Cora Wanda Lewis, Lilly Newby and Louise Cottongim, and wives Dora Heizer Woods and Shirley Hocker Woods. His death closes a generation of history, as he was the last of eleven siblings and the longest living member of the Woods family.

His voice is silenced

We can see him no more

But his message is loud and clear

My pain is gone

And the Lord my God is here

Please don't worry or miss me too much

My party has just begun

And I'll be waiting to greet you

When your time on earth is done

Visitation is at Scott's Funeral home, 2515 Veteran's Parkway in Jeffersonville, on Wednesday, February 19th from 2-8 p.m. and on Thursday, February 20th from 9-11 a.m. followed by a celebration of his life at 11 a.m. with burial to follow at Bethel Baptist Church Cemetery in Frankfort, Kentucky.

Expressions of sympathy may be made to the youth ministries of First Baptist Church.
Published on February 14, 2020
To send flowers to the family of Dewey Woods, please visit Tribute Store.

Send flowers
in memory of Dewey

A place to share condolences and memories.
The guestbook expires on May 14, 2020.