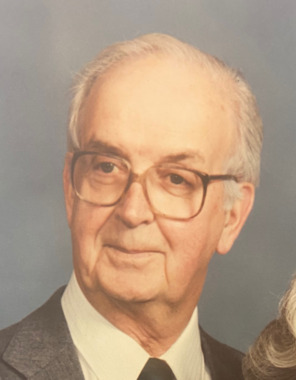 Back to Francis's story

Francis Hillson Lori, Sr., 98, died Monday, February 24, 2020 at Providence Healthcare. Francis was born June 11, 1921 in New Albany, Indiana to the late Michael and Genevieve Schulte Lori. He was a devout Catholic and was retired from South Central Bell after 38 years of service from 1946 to 1984. He was a veteran in the United States Navy during World War II in the Pacific Theater in the vicinity of Okinawa, Japan. Francis was a member of St. Anthony of Padua Catholic Church, Clarksville, Knights of Columbus Cardinal Ritter Council #1221, a Knight of the Order of the Holy Sepulchre, and a member of the Secular Franciscan Order.
Francis married Margaret Josephine Caradonna Lori on January 17, 1947 at St. Mary of the Annunciation Catholic Church in New Albany, Indiana; they have two surviving sons, Archbishop William E. Lori and Joseph P. Lori; and a sister, Freda Jahn.
In addition to his parents, he is preceded in death by a son, Francis H. Lori Jr.; siblings, Marie Pirtle, Melvin Lori, Rose Bowman, Irma Eaton and Jessie Skelton.
Visitation will be from 4 p.m. to 7 p.m. on Wednesday, February 26, 2020 at Diversicare Providence Retirement Home, 4915 Charlestown Road, New Albany, Indiana. His funeral Mass will be celebrated at 10 am Thursday, February 27, 2020 in the Chapel at Diversicare Providence with interment to follow at Kraft-Graceland Memorial Park.
In memory of Francis, donations may be made to Volunteers of America, Mid-States, 2676 Charlestown Road, Suite #11, New Albany, Indiana 47150.
Published on February 24, 2020
To plant a tree in memory of Francis Hillson Lori Sr., please visit Tribute Store.

Plant a tree in memory
of Francis

A place to share condolences and memories.
The guestbook expires on May 24, 2020.

Suzanne Duncan
The first thing I read in Frank's obituary was that he was a devout Catholic and I can attest to that. He attended Mass every Sunday and I was honored to give him Holy Communion on Tuesdays. His presence will be greatly missed. May he rest in peace.
Sr. Antoinette Purcell, OSB
I remember the joy of greeting Francis and Margaret during the Sign of Peace and after Sunday Mass whenever I was at my home parish of St. Anthony's in Clarksville with my parents. Seems they and my parents were always in adjoining pews at Mass. My parents passed away in 2000 and 2004 so I haven't seen Francis and Margaret for a number of years but still hold the wonderful memory of having known them as gentle and faith filled people. What a beautiful couple! My condolences to Margaret, Archbishop Lori and Francis. My thoughts and prayers are with you.
John Caradonna Family

Rev. Clifford Vogelsang
I will remember the family at Mass this evening. May he have peaceful rest and eternal memory.
Rhonda Maymon Eckert

Archbishop William Lori and family members, I send my sincere condolences and prayers to you. God bless you and help you through these sad times. Love and prayers, Rhonda Eckert