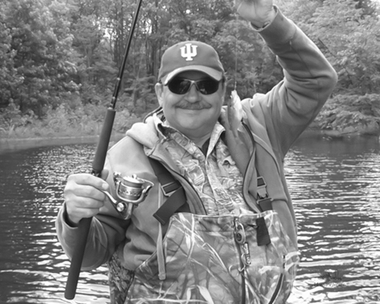 Back to George's story

George Edward Waters, age 62, of New Washington, Indiana entered this life on July 29, 1954 in Jefferson County, Indiana. He was the loving son of the late George W. and Alice Berniece Breedlove Waters. He was raised in Jefferson and Clark Counties. He graduated in 1972 from New Washington High School. He was inducted into the United States Navy on September 9, 1972 and rose to the rate of Radioman second class. He served during the Vietnam Era and served aboard the USS Dixon (AS 37) and was honorably discharged on September 9, 1979 from San Diego, California receiving the Good Conduct Medal. On April 23, 1977 he was united in marriage to Shirley Ann McDaniel in Clark County, Indiana. This happy union of nearly 40 years was blessed with a son, Timothy and a daughter, Chrystal. George was employed with Anderson Wood Products in Louisville for 34 years. He attended Ivy Tech and received a degree in carpentry and cabinetry and was a Journeyman Carpenter. George loved to fish, fish, hunt and fish some more. He was an excellent woodworker and could produce the most beautiful pieces as heirlooms. George died on Tuesday, March 14, 2017, at 12:00 Noon at his home in New Washington, Indiana with his loving family at his side.
George will be missed by his loving wife of nearly 40 years, Shirley Ann McDaniel Waters of New Washington, Indiana; his loving son, Timothy Waters and his wife, Sherry of Elizabeth, Indiana; his loving daughter, Chrystal Trosper and her husband Billy of Hanover, Indiana; his loving grandchildren, Sierra Nicole Burks (Alex), Dakota Uhl, Hunter Uhl, Makayla Waters, Cody Hutchison, Brianna Trosper and Caleb Trosper; his loving brother, David A. Waters and his wife, Crystal of New Washington, Indiana; his mother-in-law, Nancy McDaniel of Charlestown, Indiana; his brothers-in-law and sisters-in-law, Michael L. Henry of Columbus, Indiana, Mary and Kenny Haley of Jeffersonville, Indiana, Betty and Richard Layton of Otisco, Indiana, Pam Clair of Scottsburg, Indiana; several nieces, nephews, cousins and other relatives.
He was preceded in death by his father, George W. Waters, his mother, Alice Berniece Breedlove Waters Hartman, his stepfather, Charles D. Hartman, his sister, Rosetta D. Waters Henry, died October 7, 2015, and his grandparents, Sug and Goldie Waters and Maurice and George' Breedlove.
A final salute will be conducted on Friday, March 17, 2017, at 11 a.m., by Jefferson Post 9 of the American Legion at the Morgan & Nay Funeral Centre, 325 Demaree Drive in Madison, Indiana. Full military honors and Interment will be private in the Indiana Veterans Memorial Cemetery, 1415 North Gate Road in Madison, Indiana
Friends may call Thursday from 4 to 8 p.m. and Friday from 9 a.m. until the time of service at the Morgan & Nay Funeral Centre, 325 Demaree Drive in Madison, Indiana.
Memorial contributions may be made to the American Cancer Society. Cards are available at the funeral home. Online condolences, www.morgan-nay.com
Published on March 15, 2017
To plant a tree in memory of George Edward Waters, please visit Tribute Store.

Plant a tree in memory
of George

A place to share condolences and memories.
The guestbook expires on June 13, 2017.

Restore the guestbook to view the 1 more posts by family and friends, and share a memory or message of condolence of your own.