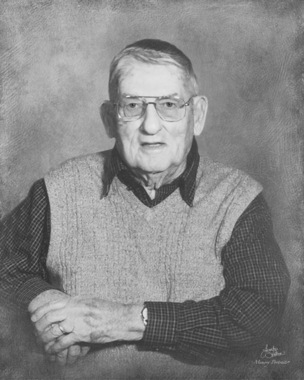 Back to Hubert's story

Pop entered this life on Sept. 10, 1925, in New Albany. He was the loving son of the late, Hubert Clinton Sr. and Oma Thomas Keithley. He was raised in New Albany and attended school there. His mother signed for him to enlist in the United States Marine Corps on Oct. 10, 1942, in New Albany. He served during World War II and rose to the rate of Corporal serving in the 4th Marine Division and was present to see the flag raised at Iwo Jima. He was honorably discharged Nov. 16, 1945, at Great Lakes, Ill.
In April 1945, Pop was united in marriage to Mary Alice Knight in New Albany. This union was blessed with a son, Hubert Clinton Jr., Judith and Marcie. Pop had attended auto mechanics school in New Albany. He began employment with the New Albany Motors (Coyle Chevrolet) working in sales, parts and as a mechanic. Pop had worked as head jailer for the Floyd County Sheriff's Department and as a reserve deputy. He retired in 1983 as a plant supervisor for Hooker Industrial Chemicals, Clarksville where he began working in the 1950s as a foreman.
Pop had served as chairman of the board, fire chief, lieutenant and held other many offices in the former McCulloch Volunteer Fire Department in Clark County for many years. On Oct. 6, 1962, he was united in marriage to Marjorie Lou Hannan in Jeffersonville. This happy union of 53 years was blessed with one daughter, Lorraine. Pop was a member of the Centenary United Methodist Church in New Albany for many years and now the Pisgah United Methodist Church in Deputy. He was active in the Indiana Volunteer Fireman's Association and was honored for more than 50 years of service and the WHAS Crusade for Children.
He loved his Dalmatian named "Boots" and had owned a 1941 Seagraves Fire Truck. Pop enjoyed playing softball, hunting, fishing, camping, telling stories, socializing, was extremely patriotic, and being with his family. Pop and Marge moved to the Deputy community in 1986 and enjoyed all the friends they had made. He also held membership in the Antique Car Club of Madison.

He was preceded in death by his parents, Hubert Clinton Sr. and Oma Thomas Keithley, his wife of 53 years, Marjorie Lou Hannan Keithley, died March 27, 2015, his daughter, Judith A. Keithley, died July 3, 2014, and his brother, Robert W. Keithley.

Visitation will be from 1 to 3 p.m. Sunday at the church. A final salute will be conducted at 3:30 p.m. at the Pisgah United Methodist Church by Jefferson Post 9 of the American Legion with full military honors to follow at the graveside.

The family requests memorials in memory of Hubert to the Pisgah United Methodist Church or WHAS Crusade for Children, contribution cards are available at the church.

Online condolences may be sent to the family via the funeral home's website at morgan-nay.com
Published on January 20, 2016
To plant a tree in memory of Hubert Clinton Keithley, please visit Tribute Store.

Plant a tree in memory
of Hubert

A place to share condolences and memories.
The guestbook expires on April 19, 2016.