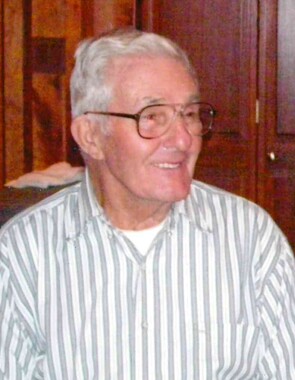 Back to Robert's story

Robert C. Temple, 90, of Borden, passed away Sunday, May 26, 2019. He was born December 27, 1928 to the late Lawrence E. and Maude (Bell) Temple. He was a member of Chapel Hill Christian Church.
In addition to his parents he was preceded in death by his wife, Betty Jean (Scott) Temple; step-mother, Thelma (McIntyre, Scott) Temple; daughter-in-law, Linda Temple; seven brothers; three sisters; three step-brothers; and one step-sister.
He is survived by three sons, Bobby (Janet) Temple, James Temple, Michael (Mary) Temple; one daughter, Karen (Sam) Quinn; five grandchildren; eight great-grandchildren; one great-great grandchild; sister, Norma Goodrich; step-brother, Roy W. Scott Sr.; and numerous nieces and nephews.
Visitation will be 2 p.m. to 8 p.m. Wednersday and from 9 a.m. until time of service Thursday, at Love Funeral Home, Palmyra. Funeral service will be held at 11 a.m. at the funeral home with burial to follow at Chapel Hill Christian Church cemetery.
In lieu of flowers, expressions of sympathy in his memory may be made to Chapel Hill Christian Church, 6940 Chapel Hill Rd., Borden, IN 47106 or Diversicare of Providence, 4915 Charlestown Rd., New Albany, IN 47150.
Published on May 28, 2019
To plant a tree in memory of Robert Clarence Temple, please visit Tribute Store.

Plant a tree in memory
of Robert

A place to share condolences and memories.
The guestbook expires on August 26, 2019.

Restore the guestbook to view the 3 more posts by family and friends, and share a memory or message of condolence of your own.